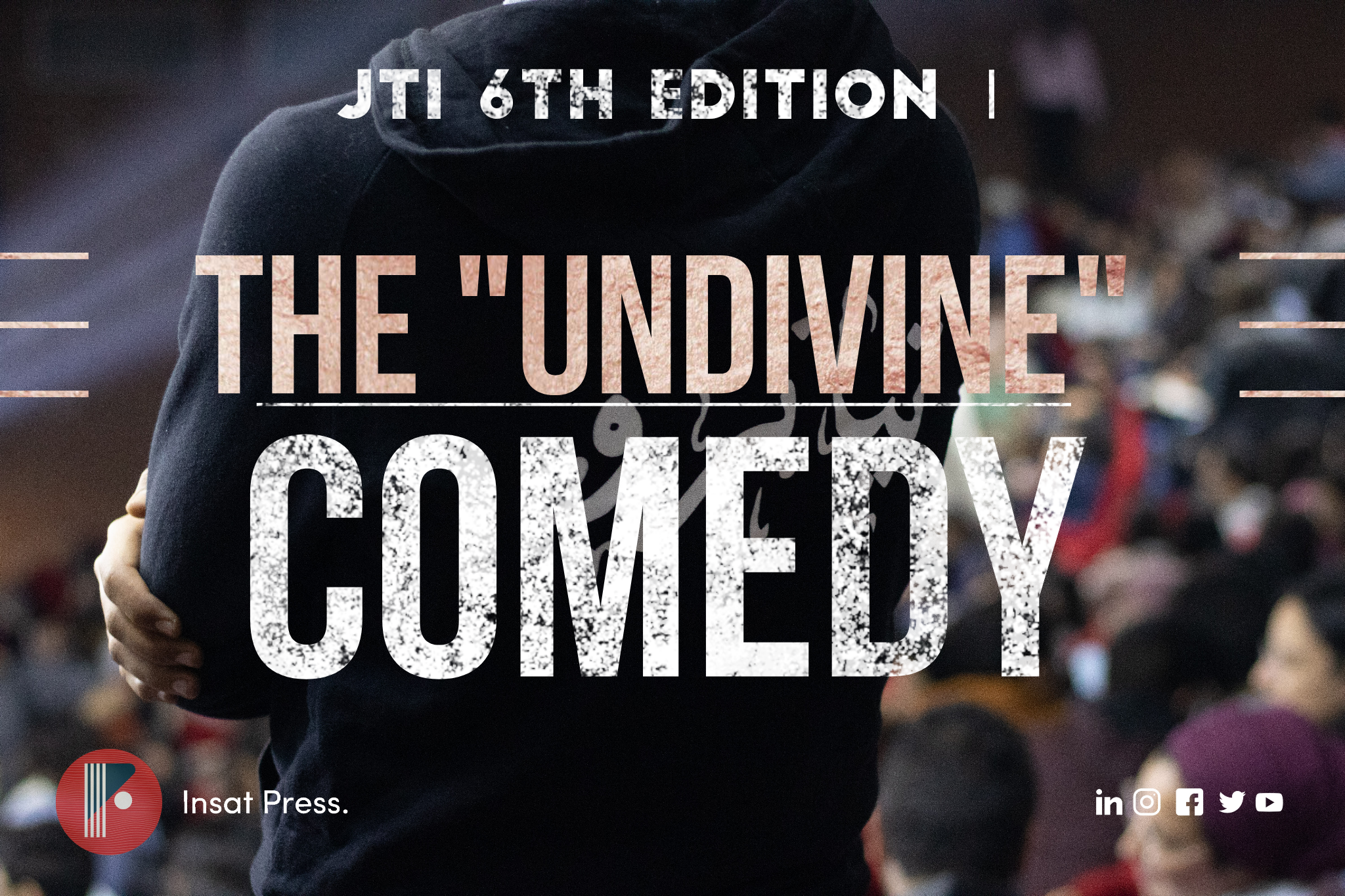 On February 23rd, took place the 6th edition of one of the most awaited events in INSAT, the famous JTI, presented to us by THEATRO INSAT. The event deserves its spot at the top, seeing that the tickets were sold out only one hour after the start of the selling.

On this day, students, professors and professionals reunited in the grand auditorium to enjoy an afternoon filled with emotions and creativity.

This year’s theme was “The Undivine Comedy”, which was showcased through three theatrical pieces that, unlike the last editions, were directly connected to each other and separated by dance and singing segments.

This piece mainly served as an introduction to our three main characters, yet it didn’t discard the smaller roles either. Its main theme was the mortal’s dreams.

It began with an unconscious woman, who wakes up in a state of total hysteria, struggling to breathe and unable to form any words while trying to discern her surroundings. In this unknown space, she meets Abd Sattar, who keeps asking her for her “death certificate”.

Confused and troubled, the woman leaves, looking for answers: Where was she? How did she get there? and most importantly, how can she leave?

We discover that this woman named Mounira, has just passed away and found herself in the afterlife, somewhere between Heaven and Hell: a Limbo.

In her pursuit, she stumbles upon Ahmed, a fellow dead human. Mounira choses to ask him for guidance and so, we see Ahmed’s former life.

In this particular scene, we see Ahmed having a conversation with his friend, Samir, about their dreams, trying to find the means to make them come true. This conversation was basically a preface to the second play, as it showed the two boys slowly wander into the den of drugs.

Right after that, we are introduced to Nour,  the girl that Ahmed is in love with. Her character had a lot of ambition and “joie de vivre”, making her seem like the life of the party.

Through Nour’s character, we are introduced to a person who had their dreams shattered, but kept moving forward. With her powerful monologue, she takes us higher and higher as she almost reaches her dream, but a violent fall brings us back down into a pit of despair just as she fell on the stage.

Nour teaches us to not surrender and to always look for the small occasions to celebrate life despite its trials and tribulations.

She also brings forward the idea that once something is lost, it cannot be found again, however, that is no ground for giving up, or else, no will to live will remain, therefore, we all ought to start over no matter how much it pains us.

This piece’s theme was “the two sides of the same coin”, which is a fairly complexe subject to address.

We slowly see how Ahmed’s innocent dreams transform into something dark and twisted: Desire and greed for power and dominance as he dives deeper and deeper into the world of drugs and money. This scene served as a direct parallel to our reality, as many youngsters found themselves grabbed by the throat by the claws of desperation, forgetting themselves and their dreams in the process.

As the two friends get into a heated argument over whether or not to quit the odd jobs they’ve been doing, Ahmed throws a tantrum claiming he will have the whole world at the palm of his hand. Just as Samir points out his weakness, Ahmed proceeds to kill him in a fit of rage.

It was then that it was finally revealed that both Samir and Ahmed were the same person but each one meant an eternally existing side of the human entity filled with complexity and dominated by internal endless battles and dilemmas between fear and courage, goodness and evil.

In the following scenes, we are finally introduced to the character of the Devil, “Ibliss”, who’s main purpose is entering paradise. To do so, he must convince Abd Sattar to let him through.

However, Abd Sattar was not easily swayed nor tempted by the Devil’s words, pushing Ibliss to take more drastic measures which resulted in the death of 600 people, who happen to be the spectators in the auditorium.

Throughout this piece, we see that even the Devil, whose mission was to hinder human goodwill and make people drown in sins and guilt, couldn’t accomplish such a feat, as he proves to be weaker than the values of human decisions.

This defeat leads to a grand fight between Angels and Demons, filled with funny references yet doesn’t neglect to show the contrast between the two sides: goodness and evil.

Amidst this chaos, a lost Mounira makes her way through the battlefield and into Heaven, as its door remained unguarded.

This third and final piece started out with Mounira meeting her uncle in Heaven. He welcomes her with warm hugs and a lot of energy, making us forget the setting they’re in.

Beyond romanticizing death as a pursuit of life in another form, or as a justice maker, this piece was an eye opener to the hypocrisy, lies and betrayals that could poison our lives.

Mounira, was awarded as a newcomer to Heaven by seeing her funeral. She wanted to know what she really meant to people in her past life. She unfortunately uncovered a bitter truth about her father, whose attention was on appearances and the family’s reputation, her jealous sexist colleagues, who envied her in her life and gossiped about her in her death, and even her own child, who had us close to tears. While she buried herself in her work as a doctor, she unintentionally shut her eyes to her son’s loneliness and need for parental care and love.

Absolutely devastated by the sight of her close ones bashing her, Mounira slowly descends and sits with the other inhabitants of Heaven, without a single word uttered. However, they soon realize that she’s the imposter among them and try to chase her away, and in the attempt to escape, Odin descends upon her.

The dialogue that takes place between them is one that brings up many philosophical questions such as “Do you have any regrets in your life?”, “Why do you want to go back to life when you’re already in Heaven?” and “Do you want to live for you, or for someone else?”

This scene was especially emotional for the spectators as we struggle to answer these questions for ourselves, and we finally see life and death in a new light we haven’t seen before.

The amazing light work, the beautiful performance and splendid delivery of speech of the two actors made us question our reality and our ways of living as it brings out the importance of self satisfaction and self fulfillment above people’s recognition.

The emotions escalated even more when Mounira finally realizes what she has to do to go back: Suicide. Without hesitation, she takes the poison, and the play ends with Mounira dying and coming back to life, all at once, just like a phoenix.

We couldn’t conclude this article without mentioning how beautiful and stunning of a performance our students put together for the artistic segments that ran in between the plays.

The dynamic dances were a sight to behold, taking us through a whole journey around the world in shimmering lights, and the acapella was a showstopping new addition that sent all of our bodies into shivers.

This edition of JTI seemed like the beginning of a magical era where Art remains the God of all aspects of life as it marked our hearts and souls with a spellbinding show putting us in a world where time and space were no boundaries.

Dark comedy, eloquent speech, and sharp yet detailed acts controlled our emotions and grasped our curiosity.

A special thanks goes to the JTI organizing committee, as well as all Theatro members, for creating such a spectacular show, worthy of high praise from professional actors and theater professors, with themes that are food for thought, and visuals that are food for soul.

That’s our pride and glory, we are engineers who learnt the formula of Art by heart!

This April, CSI ENSI is pleased to finally announce its most popular and challenging event, HACKZONE, back in its 10th edition for cybersecurity enthusiasts and onlookers from all over the world. After many challenging editions that have met expectations, CSI ENSI promises you this year’s off-the-charts edition that will be even more challenging than usual.

CSI ENSI is a cybersecurity community within ENSI that aims to foster awareness of dangerous security threats.

Believing that the measures needed to safeguard your data are no longer based on simple firewalls and antivirus software.

For those who are not yet familiar with Hackzone, it is a 24-hour event that brings together a set of workshops led by professionals and experts to delve into cyber security matters. The programme features a Conference that covers the latest in cyber security and emerging trends sweeping the world, covering a wide range of technical, structural and legislative concerns.

Throughout the night, participants will be competing and assessing their cybersecurity skills and techniques in our famous competition: Capture The Flag.

In addition, participants and non-participants will enjoy other entertainment activities and games throughout the night.

The winners of our CTF competition will be announced on the second day after the end competition.