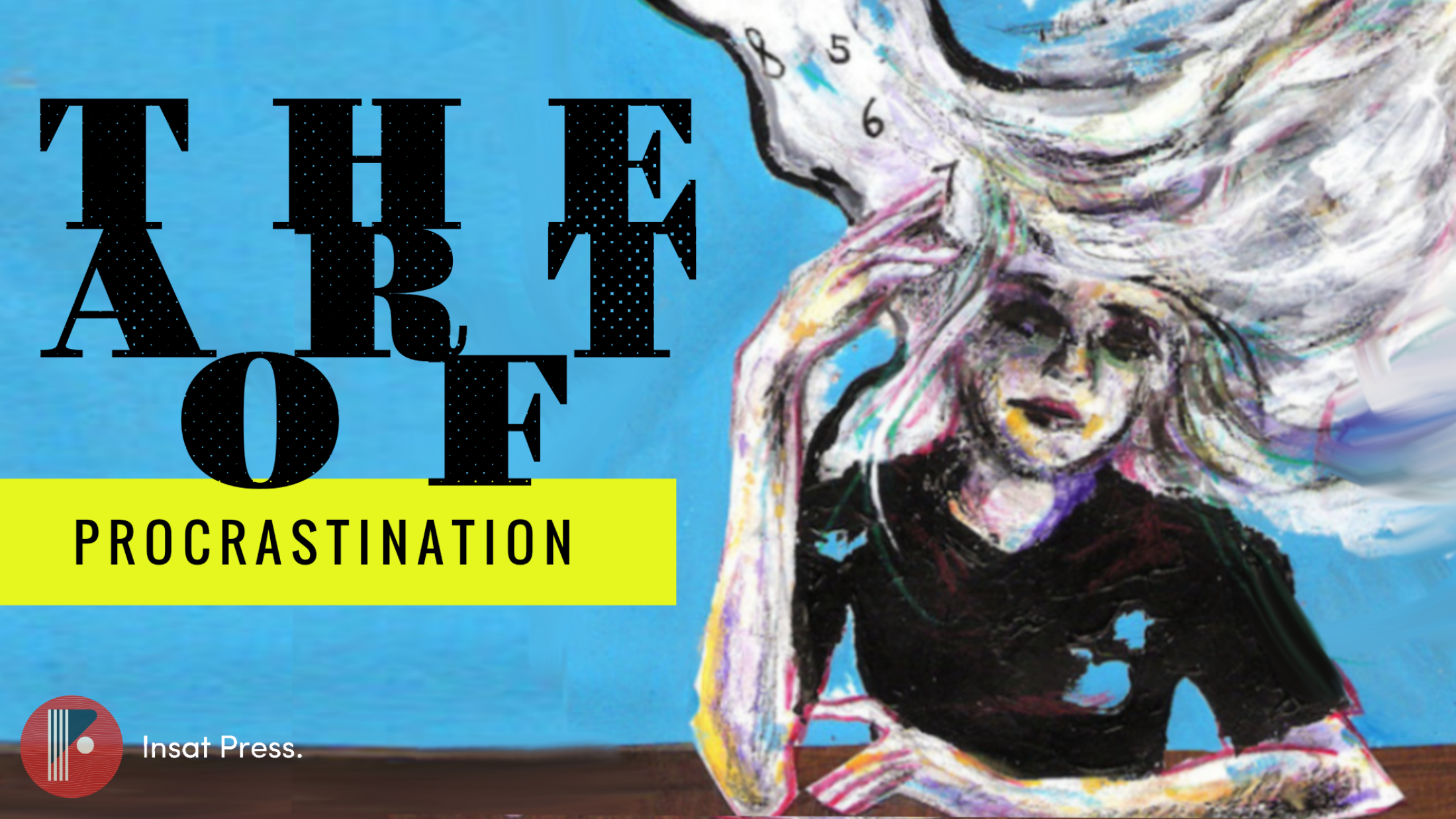 Procrastination: The art of delaying tasks until the last minute just because we can.

“But then I noticed something. On the whole, I had a reputation as a person who got a lot done and made a reasonable contribution. . . . A paradox. Rather than getting to work on my important projects, I began to think about this conundrum. I realized that I was what I call a structured procrastinator: a person who gets a lot done by not doing other things.” The Art of Procrastination: A Guide to Effective Dawdling, Lollygagging and Postponing, by John R. Perry.

Procrastination is quite a curious concept that every person has experienced at least once in their life. Does a non-procrastinator even exist? I think it’s merely a term made to make procrastinators feel more anxious about putting off work until the very last second.

However, if I were to describe what presumably a non-procrastinator is, it would be a person who would make a schedule and stick to it. Someone organized and rational enough to start their tasks early on. We have all tried to be that person at one point or another in our lives, one day we decide that we have had enough of missed deadlines and stressful, guilt-filled “free time” and make a schedule to complete work on time, sleep well and organize our day.

But why does it never work? No one wakes up thinking “it’s a beautiful day to waste my time doing absolutely nothing so I can stress about it later”. What experts, authors, researchers, and activists might say is to “just do it”, just wake up at 5 am for no reason whatsoever, use schedules, read a book, go out for a run, and might as well win an Olympic medal.

Trying to get to know more about the solutions to procrastination, I once attended a workshop about “Time Management” by Katy Smithy Founder and Chief Marketing Officer at Smallwave Marketing. She explained to us that the best thing to do is “eat the frog first thing in the morning” which is first of all animal cruelty but most importantly, what chronic procrastinators fail to do the most. When prioritizing and setting up a schedule, we’re well aware that we should start with number 1 but for some reason, number 55 is calling out our name. We end up doing the somewhat less important tasks and shuffling the schedule over and over until it’s 23:59 on a Sunday and the project due to 00:00 is not even close to finished. So, while we’re well aware of procrastination and its consequences, why do we do it?

Inside the mind of a procrastinator

Most of the time it’s our anxiety holding us back from completing important tasks. It might be a lack of self-confidence or a case of impostor syndrome (a psychological pattern in which an individual constantly doubts their skills and accomplishments). It could also be disorganization and cognitive distortion (overestimating the time we have), perfectionism (wouldn’t we all like to think it’s the cause), fear of the future and/or failure, failure to see the near result, or most importantly the feeling of lack of control i.e. Nadine wanted to learn Latin (for some reason). Her Latin teacher gave her mandatory homework for next week. Since now she HAS to do it, Nadine doesn’t feel like doing it anymore. If we see the tasks as mandatory instead of a fun activity, all motivation suddenly seems to go away.

Some procrastinators like to think they work better under stressful situations and tight deadlines. In some cases, it might turn out to be true, but in others, it’s a coping mechanism. Even though all these characteristics are common for all procrastinators, we fall into sub-categories of procrastination.

The overbooker and the Revenge Bedtime procrastinator:

You might be thinking, why these two types? You might also be dosing off at this point thinking why am I reading an article about procrastination while procrastinating on doing my 15 tasks due for tomorrow.

I think these two types are the most common but at the same time, the least talked about.

The overbooker thinks they’re always busy and don’t have time for anything else. But if they were to summarize what they did all day long, it wouldn’t be as much as they anticipated. It’s mainly due to poor time management and easily getting distracted.

John Perry the author of “The Art of Procrastination: A Guide to Effective Dawdling, Lollygagging and Postponing” further explains: “The key idea is that procrastinating does not mean doing absolutely nothing. Procrastinators seldom do absolutely nothing; they do marginally useful things, like gardening or sharpening pencils, or making a diagram of how they will reorganize their files when they get around to it.

Why does the procrastinator do these things? Because they are a way of not doing something more important. If all the procrastinator had left to do was to sharpen some pencils, no force on earth could get him to do it.” I must admit I still haven’t read his book, but I’m sure I’ll get to it when I finish writing my 15th revised schedule this week.

As for the Revenge Bedtime procrastination, it’s the phenomenon of delaying going to bed to often mindlessly scroll on your phone for hours. When everything is out of one’s control, “rebelling” against their sleep schedule might seem like the only thing under their control. It’s a very common issue especially for students due to long study hours and it results in disturbing their biological clock (Biological clocks are organisms’ natural timing devices, regulating the cycle of circadian rhythms) as well as low concentration, bad memory…

How do I save myself from the guilt trip of procrastination and get the job done?

You need to find what works the best for you. Some vouch for the Pomodoro technique (A cycle of 25-minutes of work and 5 minutes of rest) others might prefer the previously mentioned Eat the Frog technique, the glass jar technique, or the 80/20 Rule.

This technique focuses mainly on prioritization. The Rocks are the most important tasks, the Pebbles with medium priority and the Sand represents the least important tasks. If you fill up the jar with sand and pebbles, there wouldn’t be any space left for the Rocks. Once you start with the Rocks, everything can fit.

It means that 80% of the results are caused by 20% of your efforts. When applied to time management, one needs to recognize the 20% and focus on them to optimize their work.

Finally, give yourself prior deadlines to the ones set so even if you’re late to your deadlines, you still have time. I think merely asking yourself why you do it and trying to understand the root of the problem is a good way to start. Once you learn how to take advantage of your procrastination, you can only go up from there.You never know, you might even end up writing an article about it.

Ghosts in the Mirror 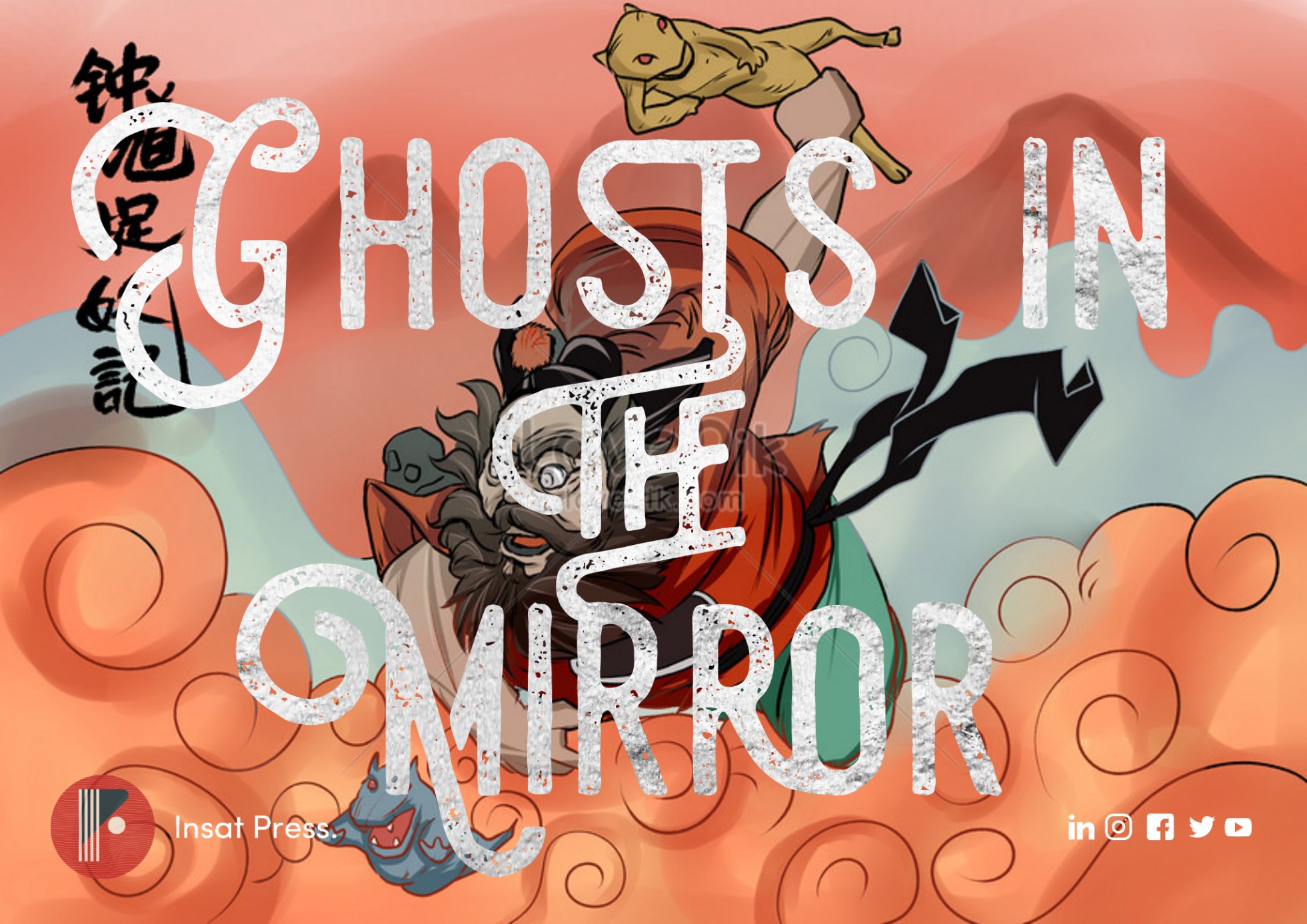 Deep down the mysterious continent of Asia, laden with centuries upon centuries of legends and stories to tell, lies the land of a thousand dynasties, China. The people of this land are known most for their vast seas of wisdom and spirituality. Their eyes look through the physical and value beauty on the purity of the soul and the mind, as we are going to see in the tears falling from the eyes of Zhong Kui, the King of Ghosts.

Bright minds are the spark of civilization yet no mind can shine brighter than Zhong Kui’s:

The hero of this story was a true genius, had the highest grades in his class, was the favorite of all his teachers, and was the teacher of all his classmates. A man of such talents deserves no less than the highest of honors and positions, and so was his thinking. Zhong Kui chose to apply for the imperial examination, to become an advisor of the king and do his part in the rising of his empire.

People in the imperial palace were astonished by Zhong’s brilliant answers and immediately invited him to assume his new position. The emperor, a pretentious man, all too pompous for the common folk was the type of man that wishes everything to be perfect and all too beautiful. He sat on his golden throne wearing the finest of his silk robes and a crown made of pure jade was resting on his head, waiting for our hero’s presence.

Zhong Kui finally arrived at the doors of the palace and presented himself to the guards who allowed his immediate entry. He could not be happier, but all of his joy sunk to the depths of the earth when he entered the emperor’s courtroom. The king gave the highest shriek when helaid his eyes on Zhong. He felt pure disgust as he looked upon our genius’ misshapen eyes and overgrown ears. He almost puked as he looked at our prodigy’s ragged clothes and dirty hair, and immediately expelled him from the palace vowing to never let something so horrendous sit on his imperial tables.

Zhong Kui wept his eyes dry as he left the presence of the emperor and walked with what he thought was shame until he reached the huge metal doors of the palace. Before leaving, he looked at his reflection on those doors and felt so much anger for the world that birthed him in such a fashion, and with so much rage and sadness building in his heart, he struck his head on the door, once, twice, and thrice, until his blood splattered all over it, and he kept beating on his brow until he fell on the ground dead, another victim of suicide.

Fortunately, his story does not end with his untimely death. As his soul traveled to the underground, it caught the eye of the King of Hell and fascinated by its purity, and sensing the talents of the new arrival. He knew that Zhong Kui was way too special to waste.

He honored him with a greater title than he could ever wish for in the emperor’s palace. He named him King of Ghosts and Hunter of Demons. Zhong was delighted and vowed to do right by his new duty, protecting all humans, including the emperor that caused him nothing but depression.

With plenty to take from between the lines of this tale, we can start with the fact that words are as sharp as swords and they can shred a soul to bits leaving a person broken, never to be repaired. There is no ugly, or hideous, there is only different.

There are no two humans on this earth that look alike and that’s what makes being human beautiful. It’s okay to have features unlike those you see in the media and pictures of models, for those features are you and nothing is as pretty as your love for yourself. Beauty too can come in so many forms, and to the forces of nature, illustrated in this story by the King of Hell and God of Death, the most natural of all forces, nothing is more important than the beauty of your mind.

Superficiality is killed when the eyes are closed to let the ears hear the magnificent words coming out of your mouth, to understand the purity of your golden ideas, and to feel the true essence of what truly is you beneath the shell that might or might not be attractive by the common definition.