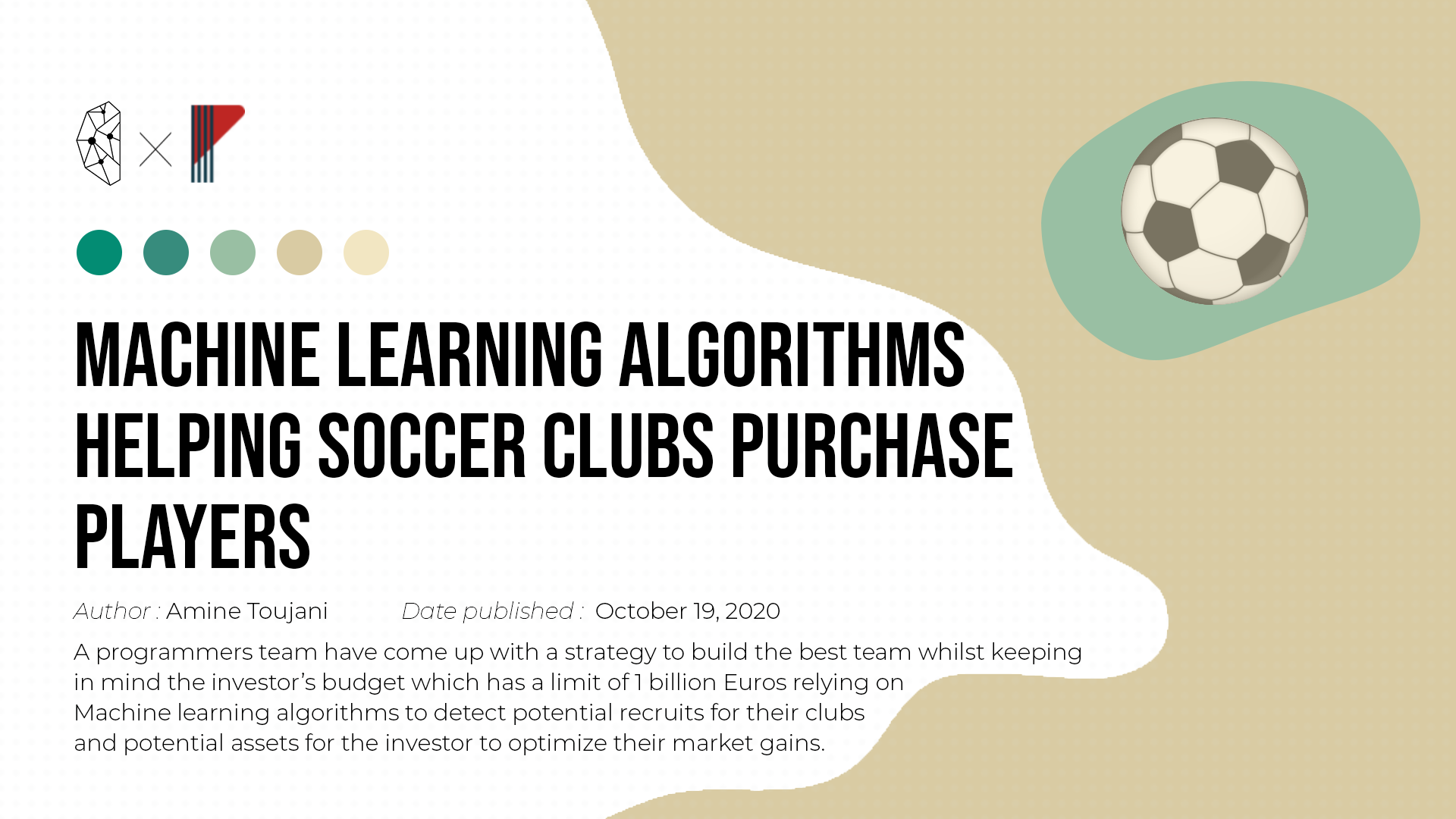 As we are progressing into a world where sports have become a vital part of our lives, it has also become a hot market for investors to gain greater income. We can also see that there has been a surge in sports viewership which leads to more tournaments. Capitalizing on them has become a difficult task for an investor. So a programmers team have come up with a strategy to build the best team whilst keeping in mind the investor’s budget which has a limit of 1 billion Euros relying on Machine learning algorithms to detect potential recruits for their clubs and potential assets for the investor to optimize their market gains.

How does that work ?

The team have a FIFA dataset in which there are few columns named — rating, release clause, and wages. They built 2 models using Supervised Learning on Rating variables and made it a classification problem by splitting this variable into 2 classes: greater than or equal to 70 and less than 70 ratings. They chose 70 as their threshold as most of the major clubs have only players with ratings greater than 70. In the second model, the rating class was obtained from previous best classifiers instead of « actual rating » and the release-clause was combined with annual wages to determine the cost to investors.

The dataset used is FIFA 19 and FIFA 20 data which contain 18k+ unique player ratings with 100+ different attributes for each player:

Due to the miscoordination among the players recently, the national team of Bangladesh slipped to their worst ever FIFA ranking of 194th. The ultimate success of a team depends upon its player selection. Generally, the coach and the management team select the best 11 players for each match from a pool of players by evaluating various attributes of the players. Now, using these Machine Learning algorithms, a better player classification technique is proposed and the soccer team is formed automatically of the best player combination possible. The results achieved based on the performance attributes would help the coach and management team to build up a more successful soccer team.

The constructed 2 models that utilize Machine learning algorithms benefit investors while simultaneously select the rightfully classified players as good performers and then regress them in the budget of the investor. Ultimately, the narrowed down selection process of a player within a club is rather better than selecting at random.

Episode 7: How AI could save the planet’s biodiversity? 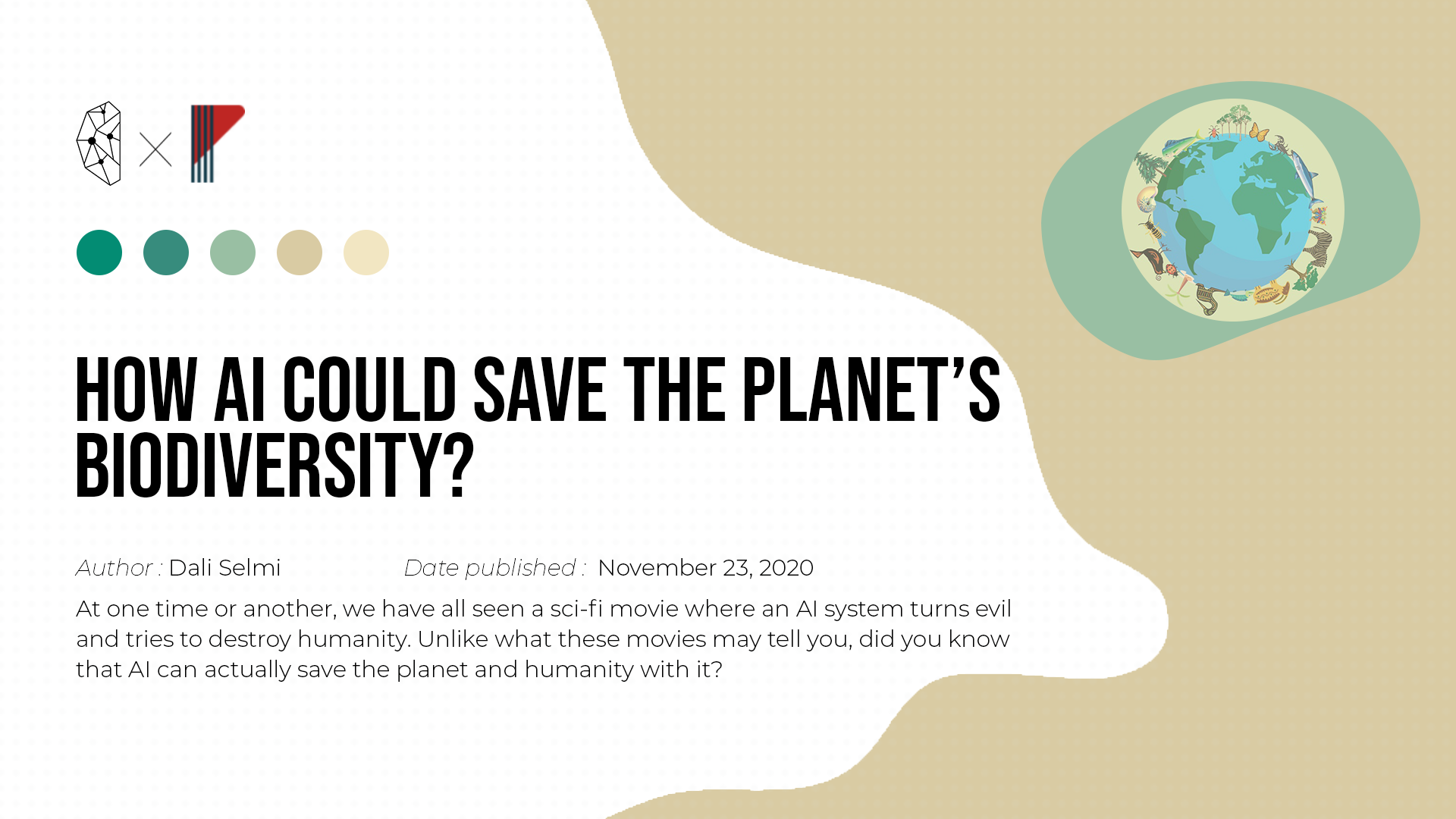 Innovations in Data Science and machine learning have brought the benefits of Artificial Intelligence to bear on our daily lives. By working alongside machines, people can now accomplish more by doing less. Putting AI into good use can help solve some of the world’s most urgent and difficult problems rather than helping organize our calendars, order our groceries, or play games.

One of the most fundamental global problems today is the exponential loss of biodiversity. In fact, scientists say that our planet is in the middle of its sixth mass extinction, the worst one since the extinction of dinosaurs, 65 million years ago. And that is due to countless direct and indirect human actions, such as poaching (illegal hunting or capturing of animals), overpopulation, habitat destruction, and climate change. Our planet’s rich biodiversity is taking such a huge hit.

In this fight against human greed, AI models have turned into an unlikely ally, helping save our planet, paradoxically from our own hands.

Today, environmentalists are facing unfair odds as hunters call on the latest technology in night-vision goggles, military-grade weaponry, and sophisticated transportation. But thanks to the immense power of deep learning, AI has unlocked the ability to rapidly scan, process, and analyze a variety of signals, identify risks accurately, and provide almost immediate alerts to the authorities.

It is a type of AI system that is particularly effective at pattern recognition and identification. For example, when these models are given thousands of pictures of whale sharks, they can learn to spot a unique whale shark from a future sighting, with remarkable accuracy let alone handle unstructured data such as images, videos, and audio clips. This incredible feature can help solve another urgent matter which is species collection.

To this day, scientists have discovered and described only 1.5 million species of the estimated 10 million on earth. At current rates, we will have to wait almost 500 years to collect all the estimated species and by then, most of them may be extinct. AI and associated technologies have the ability to close this information gap cost effectively and efficiently with hardware becoming increasingly cheap and power-efficient enough to deploy monitoring systems on the ground, on animals, in the sky, and up in space. Early work is proving that algorithms can sift through the massive amounts of data streaming back from these monitoring systems. In turn, humans and machines can begin to identify the plants, birds, fish, and other species captured by these remotely deployed cameras, microphones, and more sometimes down to the unique individual. And we are finding new ways to deploy these technologies every day. For example, Microsoft is working on ways to use organisms such as mosquitoes as small, self-powered data collection devices that can help us better understand an ecosystem through the animals they feed on.

Artificial intelligence can help us understand land-use patterns as well. Microsoft and others are experimenting with ways to turn high-resolution imagery into land cover maps. These maps provide an unprecedented view of what is where, and how it is changing. This in turn helps governments, organizations, and researchers make more informed decisions about when, where, and how to deploy conservation efforts most effectively for the greatest impact. This creates a virtuous cycle of learning, as all this information can then be fed back into AI systems, making them smarter. Thus, AI methods make it possible to build a digital dashboard for the planet, allowing us to monitor, model, and manage environmental systems at a scale like never seen before.

The most obvious use of AI indeed seems to be for further extraction, consumption, and production. However, in the middle of a climate crisis, and with a deteriorating ecosystem, species are dying. Artificial intelligence can be a magical silver bullet that will help us restore the planet. It won’t be an easy journey, but by applying the power of AI to help both humans and our natural systems thrive, we can help provide a better and healthier future for the planet.

How Artificial Intelligence Could Save the Planet

A Multilateral AI Strategy for Biodiversity and Restoration