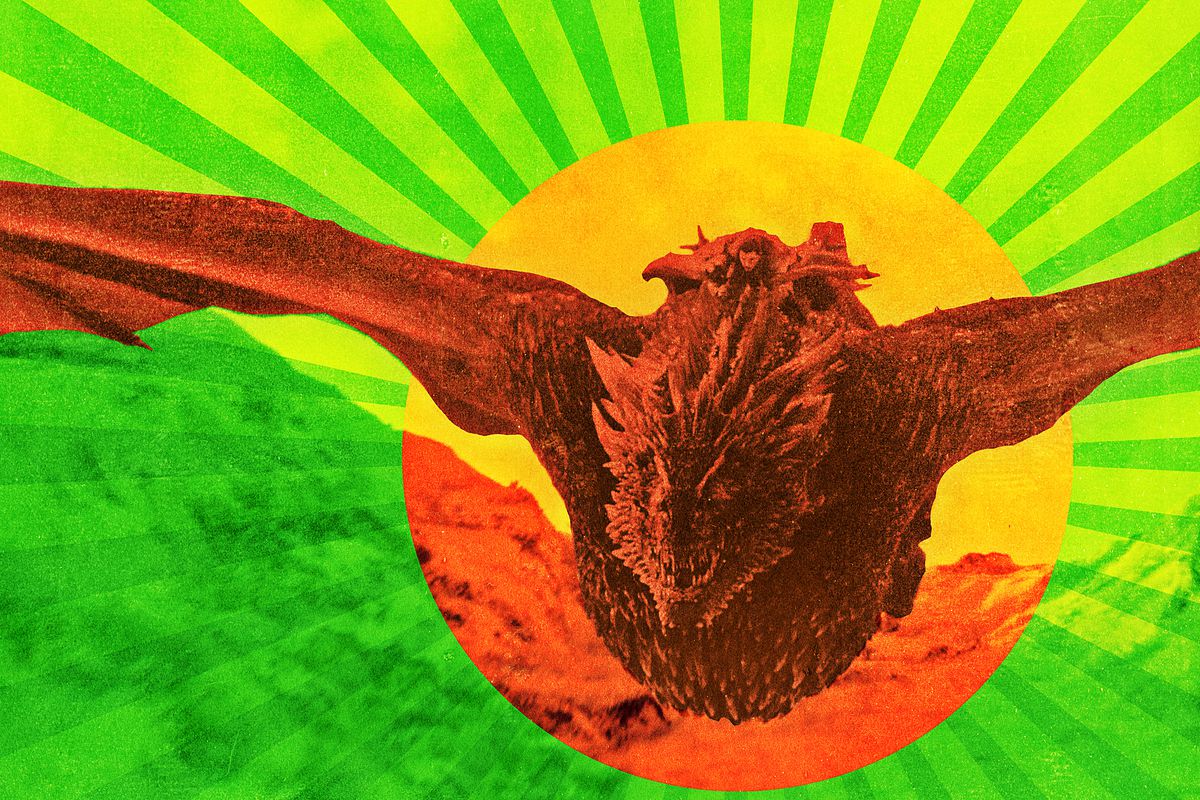 All hail the Lord of Light! The third and perharps the most pivotal episode so far in the season, the grand clash, the long-awaited collision of two polar forces. Life and death all in our good old Winterfell.

Last Sunday marked something every single GOT fan anticipated for 8 full seasons! Yet the strong excitement of the fandom ended up with strikingly controversial opinions. Let’s face it, you either love this episode or hate its guts!

Not only is this article brimmed with spoilers, but it’s also the most bipolar review you’ll ever read. Heed my warning.

This episode got the 2nd lowest rating in the history of Game Of Thrones on Rotton Tomatoes. Critics, fanclubs and even strangers to the whole phenomenon took part in an avalanche of criticism.

The episode represents the arrival of the long night which explains how dim and dark it was, you might hate it but it was done to keep things realistic for the viewers. You basically have two options, eitehr enjoy it in a dark room or face the pain of squinting for over 80 minutes.

The episode kicks off with Sam’s trembling hands then the camera moves to others bits and part of pre-battle preparations. Everyone’s well-positioned and set to kill…or be killed. Davos overlooking the archers, Sansa and Arya over the walls as well, the Dothraki are right upfront led by Jorah and Ghost, the right wing is led by the lads of the Brotherhood Without Banners, Edd, Tormund and a petrified Sam. The left wing is composed of the Northern army and the Knights of the Vale and is led by Brienne and Jaime. The majortiy of the army is composed of the Unsullied.

Jon and Daeny are overlooking everything as Theon and Lady Karstark protect Ban. Whatever’s left of mankind is hiding in the safe haven of Winterfell’s crypts.

The element of fright took over, the fear of an enemy you cannot see, an enemy you can only sense as it lurks in the dark snowy hills of Winterfell. The writers worked hard on the horror element in this scene and in Arya’s library scene later on. 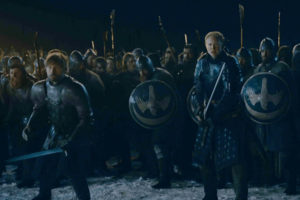 In the midst of the reigning silence a sudden cascade of footsteps  came into the scene and Melisandre made her very first appearence during this season after her disappearance to train in Volantis.

Whatever the Red Woman did in Volantis, she must’ve done it right for she lit up the whole episode for us, from dothraki Arakhs to the trench to Arya stark’s heart.

On behalf of all the viewers, thank you Melisandre for being one of the scarce sources of light in a very grim episode. 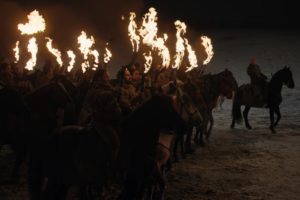 You might see it as utter brutality, you might see it as a majestic death, but you have to agree that seeing those dorthaki Arakh lights go down one by one was a sight for sore eyes. So so beautiful yet incredibly foolish.

I’m not exactly savvy when it comes to battles, but I know very well that feeding those poor dothrakis to the dragons would’ve been a wiser decision.

Whatever happened there was followed by an avalanche of military faut pas. Here’s an exhibit:

Daenerys gets emotional after seeing the Dothrakis meet their maker and decides to mount Drogon instead of ambushing the Night King and there goes Jon following her like the Knight in shining armor to grill those grizzly Wights to the ground leaving Bran in utter danger. 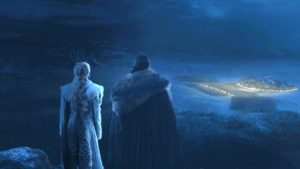 What happened on the ground:

Things are brought to action with a grand collision, the two driving forces turn into one bloody scene. It was absolute mayhem, so messy it was hard to pinpoint who was taking over, only logic provided vision and logic stated that team infected was on a roll. It can easily be described as an open-air grill.

The army was first ordered to stand their ground and fight but the strategy soon turned into a continuous fallback shielded by the Unsullied.

Winterfell went from a safe haven to a death kettle where our favorite main characters struggled to defend its walls.

Issues: Whatever happened there seems unrealistic and the plot armor is bit too sturdy to believe. In an ocean of wights our favorite characters like Jaime, Brienne or Tormund seemed invincible despite nearing death so many times in the episode. I swore they were gone for so many times during the episode. Don’t even get me started on Sam who he spent the entire episode either trembling, lying fown, or getting saved by people.

Call it sadistic, but a battle with no significant main character losses is only possible in unicorn land.

A lot of significant losses were made however and we lost people like Edd, Lady Lyanna(She felt a bit forced. Sorry, not sorry) and thousands of measly warriors no one cares about.

Jon and Dany took on the challenge of taking down the niht king but were surprised with a snow storm that disabled their abilitities to Dracarys the Night King upon his arrival riding Visereon.

Visereon went head to head with rhaegal leaving both of them heavily wounded and causing the Night King to fall to the ground.

Jon, being the hot-headed hero we love, followed the knight king with murderous intentions however the NK’s ways are a lot more twisted and he woke all the dead in Winterfell including those in the crypts.

Arya went from fiercely botching wights to absolute fear in the depth of Winterfell to being rescued by the Hound and Beric Dondarion who ended up losing his life.

Just when the music climaxes, Arya hops on the Knight King and swiftly stabs him making the whole Army of the dead really dead.

This is the part where everyone starts to disagree, I honestly can’t decide what side I’m upping so I’m going to be inclusive:

Why this ending is good enough:

The Starks and the White Walkers had strong relations since the beginning of time when Bran The Builder built the wall and Winterfell so whoever kills the Knight King has to be a Stark.

The only skilled enough stark with an ability to be swift and discreet is Arya, the knight king cannot be killed in a traditional combat for he is too strong and mighty.

Why this ending is not good enough:

Arya’s arc throughout the whole series had absolutely nothing to do with the White Walking evil. Some characters’ entire stories revolved around the upcoming Winter and they did not even get the chance to be anhywhere near the Night King.

The way the knight king was defeated is also disappointing since 8 seasons of thrill died in one second. Plus, unless Bran’s Ravens carried her,  how did Arya make it through the White Walkers protecting the Niht King? 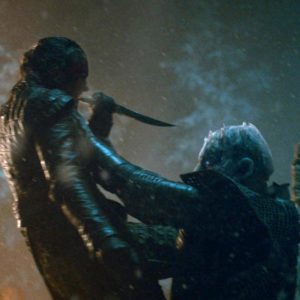 The dawn is here:

The episode is concluded with Melisandre walking into the first rays of sunlight and withering away leaving us on the edges of our seats.

Some claim that the Night King will be somehow resurrected but the path HBO seems to be taking is definitely not compatible with that. Why prolong the NK’s arc when you can make a spin-off series out of it?

The next episode will probably be similar to episode 2 where a lot of emotional scenes take place. We will see what characters plan for the war against Cersei especially after losing most of their men.

Episode 4 might finally reveal Jon’s identity to the Realm and we’ll get to see their reactions to such news. Whatever happens is presumed to be quite Shakespearean which is either really good…or really bad. 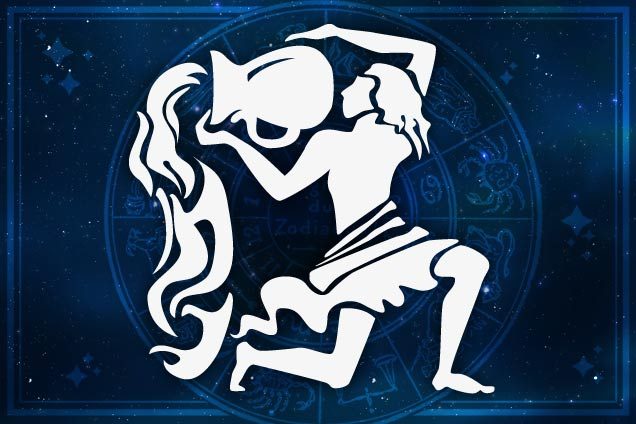